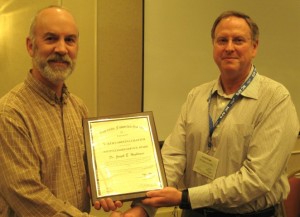 The Awards Committee is soliciting nominations from the membership for both of these awards for 2015.  If you are aware of a deserving individual or organization, please nominate them!  Nomination letters should be no more than two pages long and provide specific information on the accomplishments of the candidates and why they qualify the candidate for the award.  Qualifications for the Distinguished Service Award should extend beyond simply doing an outstanding job on regular chapter duties (e.g., officer or committee member responsibilities) and be based primarily on extraordinary efforts or new initiatives.

The chosen recipients will receive the awards at the 2015 NCAFS annual meeting to be held in Carolina Beach, NC, on February 24-25, 2015.