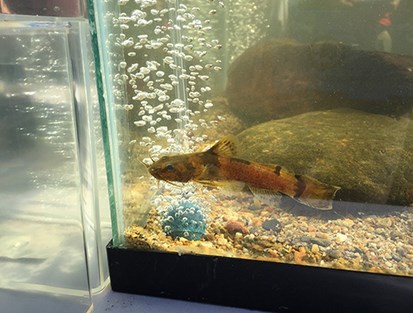 Yellowfin Madtom, a federally Threatened fish, was released into Abrams Creek at the designation event. Photo by Andrea Leslie/NCWRC.

In 2008, Trout Unlimited, Federation of Fly Fishers, and the Fisheries Conservation Foundation came together to develop a new way to approach native fish conservation on a large scale, based on coordination at local, state, and federal levels while recognizing the importance of recreation and multiple economic river uses. The result of that meeting is the Native Fish Conservation Area designation.

The Little Tennessee River basin stretches from North Georgia, across North Carolina, and into Tennessee, and includes the Little Tennessee, Tuckasegee, Oconaluftee, Nantahala, Tellico, and Cheoah Rivers, along with all their tributaries. It’s home to more than 100 species of fish, and 41 aquatic animals considered rare at the federal or state level, including a handful found nowhere else in the world such as the Citico Darter, Smoky Madtom, and Little Tennessee Crayfish.