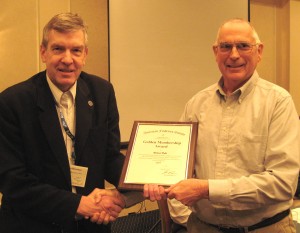 The North Carolina Chapter of the American Fisheries Society first awarded the best student paper award in 1992. At the 2002 NCAFS Chapter meeting, the Best Student Paper Award of the NC AFS Chapter was renamed the Richard L. Noble Best Student Paper Award, in recognition of Rich’s outstanding commitment and career contributions to fisheries student education. Through his dedication to teaching and mentoring students, Rich has left an indelible mark on our profession.  He was also awarded the 1996 AFS Excellence in Fisheries Education Award.

The W. Don Baker Memorial Award was established in 1998 to recognize the best scientific presentation at the annual chapter meeting. Don’s career with the North Carolina Wildlife Resources Commission had spanned 33 years by the time of his retirement in 1990. Don had served as a reservoir research biologist at High Rock Lake, was Chief of the Division of Inland Fisheries, and later coordinated all of the environmental permit review work done by the agency.

Don’s professional career was informed by his commitment to the state’s fishery resources and his strong conviction that good science has to be an integral part of successful fisheries management. He was an advocate of professionalism and understood the value of getting his staff to scientific meetings and training opportunities. He was active in the American Fisheries Society, serving as President of the Southern Division and strongly supporting AFS involvement by his staff. Nearly a decade after his retirement and subsequent death, Don’s influence on the WRC is still apparent as the young biologists he hired have matured and assumed leadership roles throughout the Division of Inland Fisheries. On a more personal level, Don Baker was a gentleman. It is particularly fitting that the Chapter recognizes excellence in fisheries technical presentations with an award named in his honor. Don would have been pleased. 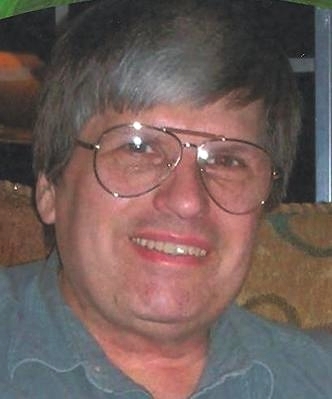 The Distinguished Service Award recognizes Chapter members who have distinguished themselves by service to the Chapter, the American Fisheries Society, or the fisheries profession.   By unanimous vote at our 2015 Annual Chapter Business Meeting, this award was renamed in honor of Jerry Finke, lost prematurely to cancer in 2013.  Jerry  embodied the spirit of long service to the Chapter and loyalty to the group of fisheries biologists that was his family.

On top of his duties to his NC Wildlife Resources Commission job of nearly 30 years, first as a fisheries biologist, then as invaluable IT support within the Fisheries Division, Jerry was always there, in the background, for NCAFS.  He provided invaluable audio-visual support for the SDAFS and Chapter meetings, making meeting technical presentations go smoothly.  In 2004, he volunteered as webmaster for our Chapter when it was time for us to have an online presence and served as the Southern Division Webmaster.  He was the first to develop an online dues and registration payment system, which continues to make life less paper-laden for our treasurers, and initiated the online voting process for NCAFS.  He received this very award in 2012 for his outstanding service to NCAFS. 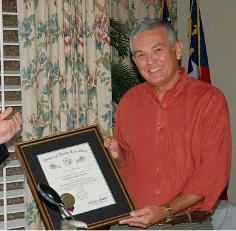 The Fisheries Conservation Award recognizes non-Chapter members who have distinguished themselves by service or commitment to the Chapter or to the fisheries resources of North Carolina. In 2009, the NCAFS Chapter EXCOM renamed the Fisheries Conservation Award in honor of Fred Harris in recognition of his long-time commitment and service to the fisheries profession. Fred served as Chief of Inland Fisheries, as well as Executive Director of the NCWRC, and President of the AFS and was instrumental in forming the NCAFS Chapter. Fred made many significant contributions to fishery conservation in North Carolina and across the nation.  He was also awarded the C.W.  Watson Award at the 2014 SE Association of Fish and Wildlife Agencies conference, the most prestigious honor given there to the individual who has made the greatest contribution to wildlife/fish conservation during the previous year(s).