We apologize for the belated announcement, but wanted to recognize the achievements of these outstanding members of our NC fisheries community!  Earlier this year, the NC Wildlife Resources Commission’s (NCWRC) Division of Inland Fisheries announced the hardworking recipients of their 2014 special awards. 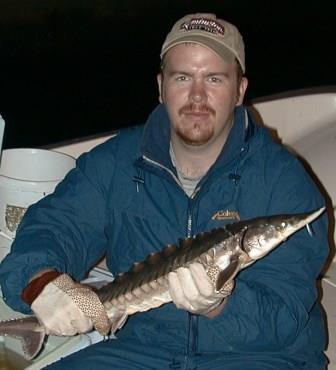 In 2014, Corey contributed significantly to the Division’s fisheries management program.  Specifically, Corey developed, helped implement, and analyzed creel surveys at Jordan Reservoir, Randleman Reservoir, and Roanoke Rapids Reservoir as well as substantially advanced the Reservoir Creel application in our BIODE database.  Further, Corey initiated the surveys to officially evaluate the American Shad and Striped Bass fisheries in the Pee Dee River. He serves as the point-of-contact for the Hybrid Striped Bass fishery at Lake Norman.  As such, he has worked diligently with local groups and anglers to obtain Hybrid Striped Bass to assist with the evaluation of this new fishery.

Corey was instrumental in conducting a region-wide Triploid Grass Carp tagging project that involved stocking fish at four different locations.  Corey has been a terrific liaison for university research as he helped develop a number of projects, including studies on White Bass and Tilapia.  At a statewide level, Corey  fostered discussions related to Striped Bass and White Bass management that will promote sound, collaborative management in the future.  Additionally, Corey has developed a draft Community Fishing Program Management Plan.  This is a statewide plan that involved collaborating with many District Fisheries Biologists where sometimes controversial or difficult decisions were necessary.

Although not currently Chapter members, we’d also like to give a nod to two other award-winners who have played vital roles in a myriad of important conservation and restoration projects in our state waters. 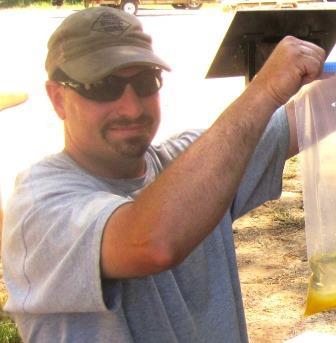 In 2014, Doug designed and provided clear and concise specifications for a new fish transport tank which resulted in a seamless construction process and a terrific end product. Doug was also deeply involved with the Robust Redhorse propagation program. Specifically, he modified or built appropriate holding tanks and screens and researched and implemented new feeding regimes. In its first year, the program was a resounding success and will continue for years to come as a result of Doug’s hard work and effort. 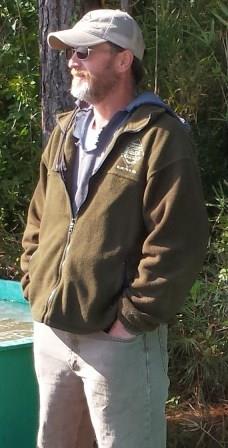 Throughout his career, Jeff has consistently met or exceeded Division goals for production at the Watha State Fish Hatchery.   Jeff was first tasked to produce American Shad for restoration efforts in the Roanoke River basin in 1998. This initial year was successful as 481,000 fry were stocked into the Roanoke River by utilizing strip spawned broodstock. However, Jeff was not satisfied with these results and he began to investigate different techniques to improve shad production.  As a result of his efforts, over 8.6 million American Shad were produced through tank spawning methods utilizing hormone injections and flow-through well water between 1999 and 2006.  Additionally, Jeff has been enthusiastic and indispensable to our efforts to preserve the Magnificent Ramshorn snail, believed to extirpated from the wild.

In 2006, a total hatchery renovation was initiated in an effort to increase production and update the facility. Jeff was instrumental in the design of the new facility and was able to incorporate many new technologies that would provide the flexibility in operations needed to meet all of the varied production demands.  In 2007, the first full year after completion of the renovations, American Shad production increased to 4.3 million fry as a result of the use of water temperature control and the recirculation system that the new facility provided. In 2008, there were management concerns about not returning fish collected as broodstock to the spawning grounds.   Because of the fish spawning protocols, tank spawned fish had to be sacrificed.  In an effort to deal with this concern, Jeff investigated spawning fish without the use of hormone injections.  These trials proved to be successful and  over 7.5 million American Shad fry were stocked by the Watha hatchery in 2014.

Jeff has consistently taken on challenging tasks and made the difficult look easy. For example, in order to minimize genetic impacts and to conclusively identify hatchery contributions, the Commission implemented microsatellite markers for American Shad stocked in the Roanoke River and Striped Bass stocked statewide in 2010. In order to make Parentage Based Tagging a reality, Jeff had to develop a system to keep individual parent groups separate at the hatchery until stocked. Jeff has successfully managed to maintain discrete groups of fish, and we are now seeing the true hatchery contribution to these river systems. Jeff also created the fin clip catalog numbering system used to maintain chain-of-custody for Watha, Edenton National Fish Hatchery, and for field staff.